Just saw a Petco TV ad telling me that my companion needs more balance in his life so that he has just the right ratio for work and play, rest and reflection, giving and receiving.  They also allude to a sort of yin-yang relationship with our four-legged companions:  “Together, we’re more complete.”

I’m pretty sure Bobo’s “right ratio” in life involves a whole lot of rest, no work, a lot of pets and scratches and a bottomless bowl of food.  I doubt he has ever reflected up anything.

Someone please smack the ad exec who came up with this campaign, the copy writer who thought it made sense to say that our dogs need time to reflect, and the VP of marketing at Petco who paid them.  Good grief.

Just in case, though … Bobo, you complete me. Namaste. 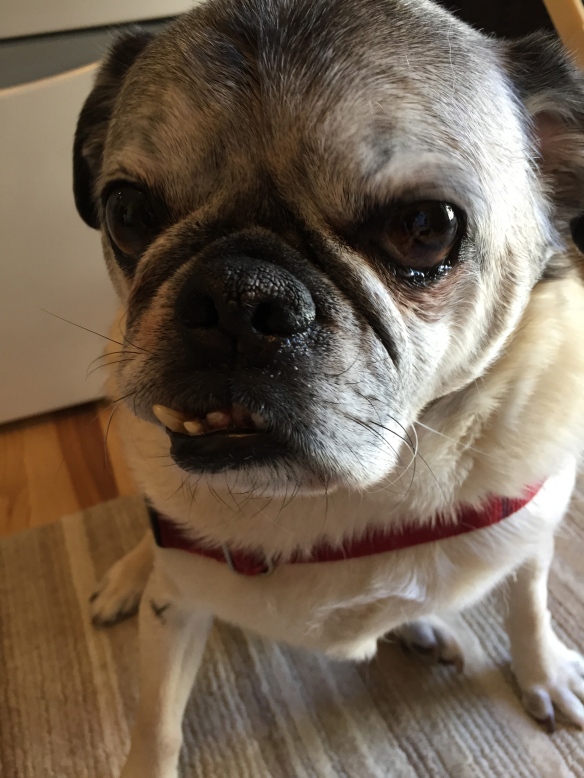 Bobo is getting old.  He is big for a pug, double the size he was “supposed” to be, and twice as tall.  Being abnormally large must be harder on his systems, because even though he is relatively young for a pug (11), he is slowing down significantly.

He has never been a smart dog, but his level of cluelessness has reached an all time high.  I don’t think he sees well, he only hears what he wants, and he is more impatient than ever.  He has trouble walking sometimes, and our wood stairs now confound him.  He has been such a good dog, and as part of our family, we will take care of him until he leaves our world.

I tell you all of this because I feel a little guilty about my reaction to Bobo’s increasing neediness.  Other people out there seem to be so understanding when their pets need extra attention.  They give their diabetic cat shots twice a day, carry their arthritic Golden Retrievers in and out of the house, make special organic, gluten free foods for their dog’s testy stomachs.  Whatever it is, they seem to do it without the commentary that I sometimes hear coming from the voice inside my head. Sometimes I say it out loud too.  “Seriously, Bobo?” I say to my hard-of-hearing pug as I trudge down to get him, “You’ve gotten stuck in the laundry room five times in the last hour.”

The truth is, I have an inner expectation that he will get better.  That his legs will remember how to move, that he will stop getting lost in the house and that he will stop being kind of, well, gross. Intellectually, I know this won’t happen.  I know, if anything, he is going to continue to decline.  I will probably have to carry him up and down the stairs someday soon, go and get him instead of calling for him to come, keep him on a leash so that he doesn’t get lost twenty feet away from me on a walk.

I’m not used to this mindset.  I’ve been raising a kid for 17 years.  The kid learns, grows and develops.  I know that he will get “better” at whatever it is he is doing.  Stairs only befuddled him for about an hour when he was six months old, and then my problem was how to keep him from going up and down the stairs when I wasn’t looking.  What I’ve learned from parenting a child is that I need to let him do it without helping more than I should.  Knowing that his goals are his to achieve or miss.  There is so much that I would love to do for him if I could, but he has to go his own way.

And so, when Bobo needs help going up the stairs, my mom-ness cheers him on, “You can do it!”  I want him to figure it out, like a child, and I get frustrated when he doesn’t.  But he won’t figure it out.  He needs something different from me.  He needs me to take care of his aging body, because we all will be old someday, if we’re fortunate.  Bobo is teaching me that we and the aging folks around us all need a little more patience and understanding.  Someone to say, “It’s ok.  Take your time,” in a kind, if sorta loud, voice.