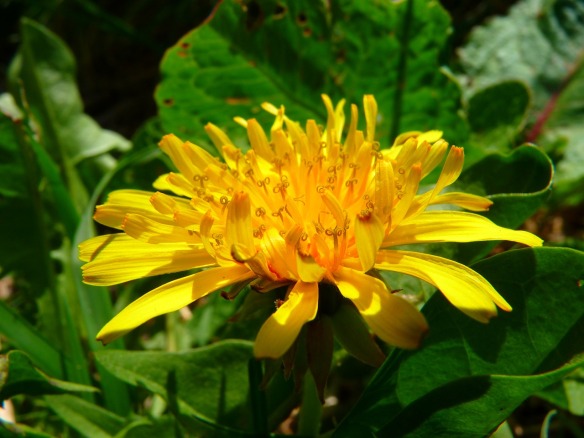 He stalked the enemy carefully, carrying his weapon of choice close.  His eyes darted side to side, glancing up occasionally to keep his bearings.  As he spotted the vile opponent, he aimed carefully and pulled the trigger.  Poison trickled down ensuring a long, slow death.  Today’s battle won, he looked west and knew that this war was far from over.  The neighbor’s lawn was covered in the yellow beasts, just waiting for a gust of wind to carry in the next wave of intruders.

As I watched my husband’s fight against the invading dandelions I thought:  Sometimes we just need a good enemy, one that we can fight openly and with gusto.

We are often ill-equipped for life’s battles.  Whether it’s at work or school, tests or deadlines, or someone who just doesn’t play nice:  the war drones on, victory an elusive shadow.  We may be baffled by our opponent, lack sufficient tactical training or reinforcements may be slim. We may not have authority to engage, or our circumstances may dictate that we must peacefully co-exist. Whatever the challenge, sometimes it just feels good to fight hard, grind in our heels, plant the flag and claim a win.  We just need the perfect foe:  one that fights back, doesn’t play fair and, most importantly, we can pummel with impunity.

We’ve been down in the trenches a lot the last couple of months.  The mortar shells are exploding around us, threatening our little kingdom.  So I couldn’t help but smile as my husband found the perfect golden-headed foe to engage and destroy.  Battle round won!  Special bonus that our yard looks pretty good.

2 thoughts on “The Perfect Foe”